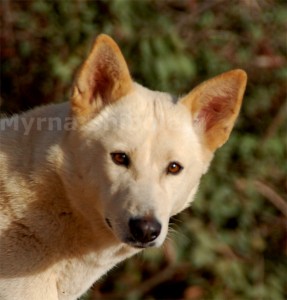 The Canaan Dog belongs to one of the most ancient families of dog, the Spitz family, whose members are found all over the world. The basic Spitz type has been modified over the centuries by the varied surroundings in which the dogs found themselves, and today includes a wide range of types, from the northern breeds of huskies, elk and bearhounds, and draught dogs, to the basenji of Africa, and even to the Australian Dingo. However, most members of this family retain certain basic characteristics – a body build tending to the square, tail carried high and curled over the back, erect ears, a natural trotting gait, and personality traits of loyalty, suspiciousness of strangers and unusual things, a tendency to aggression to other dogs, and extreme independence.

The Canaan Dog is a local development of the Spitz family in what is present day Israel. It has adapted to be ideally suited to the location. The breed has been known since pre-Biblical times, and there is archaeological evidence for this. The Canaan must have always been used as a guard dog, to protect the homes and herds of the area’s residents. Through the upheavals of history he survived in this small section of the Middle East; never selectively bred, only the strongest, most fit and most intelligent specimens survived the difficult conditions, developing according to the demands of their environment. 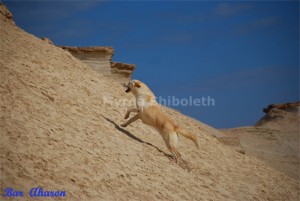 In 1934, Professor Rudolphina Menzel immigrated to Israel (then the British mandated territory of Palestine). She was already known as one of the world’s foremost authorities on dogs. On her arrival, the Haganah (Jewish Defense Forces) requested her assistance in building up a service dog organization. Prof. Menzel found that the breeds of dog most commonly used for guard, tracking and war dog tasks suffered greatly from the very difficult climate and ground conditions. This resulted in impaired efficiency. In her search for dogs that could function in the demanding conditions, her attention was drawn to the Bedouin camps and Druse settlements and the pariah dogs she observed there and wild in the desert and wilderness. Her observations indicated that this was truly a native breed of dog ideally adapted to the living conditions of this difficult land. 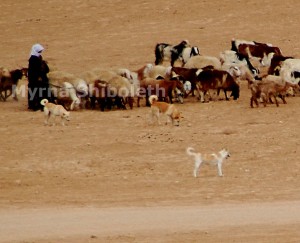 She decided to call these dogs “Canaan dogs” after the biblical Land of Canaan. Observation showed that these dogs had extremely keen senses and a highly developed sense of territory and desire to guard. Determined to try them as working dogs, Prof. Menzel began a program of “redomestication” and found them extraordinarily adaptable to domestication. She then began her own breeding program, and introduced the Canaan as a working dog. She was fascinated by these dogs and their connection to antiquity. Her goal was to preserve the true wild dog type and at every opportunity, she introduced new bloodlines from wild born dogs into her breeding program.
In 1953, the Israel Kennel Club accepted the Standard of the Canaan Dog as prepared by Prof. Menzel. The breed has since been adopted officially as the national breed of Israel. The Canaan dog was recognized by the FCI (Federation Cynologique Internationale) in 1966, and the FCI standard was revised in 1974 and again in 1985, which is the official standard today.

Shaar Hagai Kennels just outside of Jerusalem is currently the major breeder of Canaan dogs in Israel and a major exporter to all parts of the world. Founded in 1970, the foundation stock included dogs obtained from Prof.Menzel and additional stock brought in from the wild. 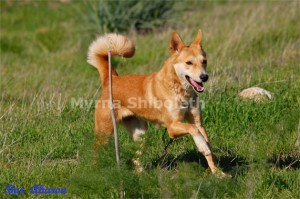 Today Shaar Hagai is breeding litters that are nine and ten generations own breeding, but the policy remains to follow in Prof. Menzel’s  footsteps in introducing new wild bloodlines whenever possible. However, it is becoming more and more difficult to find wild born Canaans, due to the “spread of civilization” and the loss of their niche in nature. 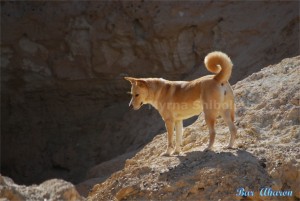 Most modern domestic breeds have been selectively bred for generations to conform to certain characteristics of temperament and appearance required to fulfill the tasks for which that breed was developed – or, in our modern times, to suit the fashions and tastes of the moment. In the last few generations, the emphasis has been much more on appearance relating to the presentation of the dogs in the show ring. There are very few domestic breeds that have remained natural. The Canaan dog is still a completely natural breed, unchanged by human intervention, and an example of nature’s law of “survival of the fittest”. It is our hope that, although the Canaan is now being selectively bred, breeders will keep in mind the uniqueness of this breed and will take care that he remains a natural dog with his distinctive characteristics.